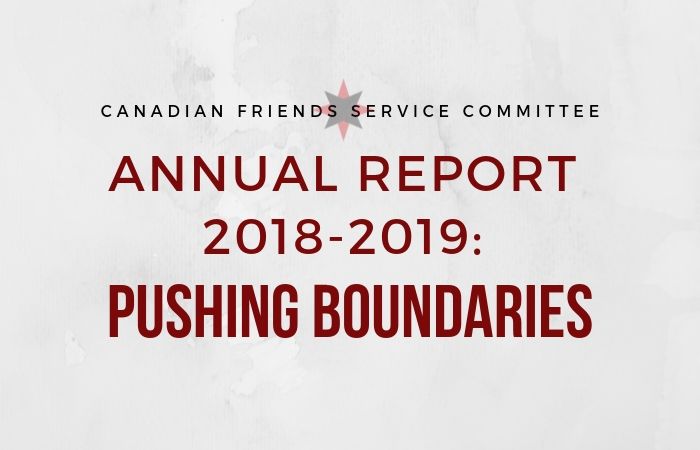 “To turn all we possess into the channel of universal love becomes the business of our lives.” 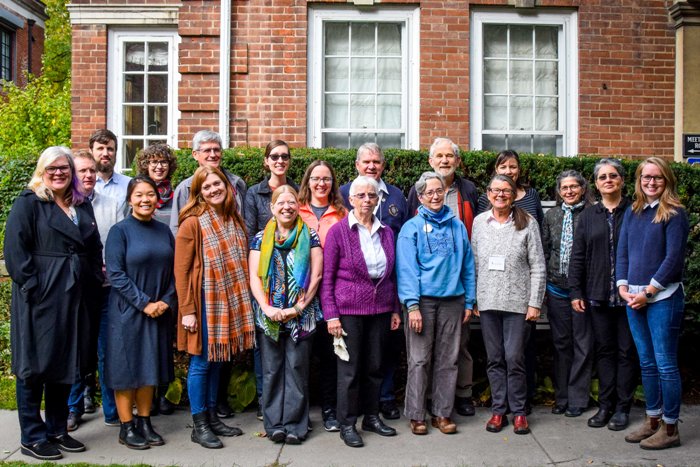 It has been a full year with CFSC’s work growing in many exciting ways. Our new structure has helped us to reach out and connect with Quakers and others in more parts of the country this year. Meetings were held, often alongside public events, in Vancouver Island, Saskatchewan, Winnipeg, Toronto, and Ottawa.

Our new structure meant the time-consuming task of revising and approving all of our administrative and personnel policies, which is now thankfully done. It’s been two years since our staffing model was restructured. CFSC’s Personnel Committee met with staff to evaluate the changes and tweak job descriptions. Since the jobs were realigned, there has been less stress on staff. The capacity of staff to carry out program work and fundraise has been enhanced by the new and more formalized Program Assistant staff position.

Approximately half of our revenue comes from donations from individuals. A reserve fund in the form of investments and bequests contribute to the remainder of our budget. While our funding is at least somewhat sustainable, we cannot take future donations and bequests for granted. To that end, we developed a 10-year vision and budget to assist with fundraising and also allocated a little more staff time to this.

This report is a brief snapshot of our work. There are many channels to find out, in more depth, all that we do: website; Quaker Concern; E-newsletter; social media (Facebook, Twitter, Instagram); workshops and visits by CFSC staff and committee members; and external publications and media interviews.

The channel of universal love

All of these efforts—turning your gifts toward the service of love, justice, and peace—are funded by individuals like you. Please, donate now. 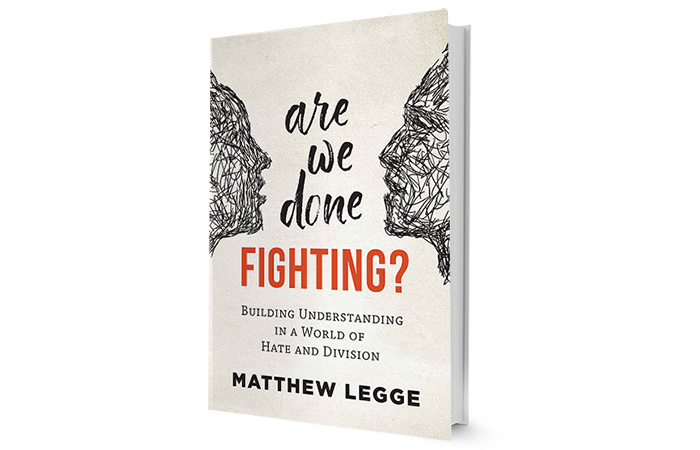 CFSC’s book Are We Done Fighting? was published by New Society Publishers this year

The main goal of CFSC’s peace work is to contribute to creating a culture of peacebuilding to identify, engage constructively with, and transform conflict.

To help us achieve our goal, Peace Program Coordinator Matthew Legge worked with input from many people to write a book, Are We Done Fighting? Building Understanding in a World of Hate and Division, which was published on May 28, 2019. The book is full of carefully collected research and practical tips readers can use right away. This coming year, we are eager to take the book on the road and use it as a tool for dialogue with communities.

CFSC committee member Bertha Small successfully visited partners carrying out peace work in Burundi and DR Congo. CFSC’s support has allowed Friends Women’s Association in Burundi to operate a gender-based violence reduction program. Our support has also enhanced the long-term sustainability of Project Muinda in Kinshasa, DR Congo, through having a building to rent out with revenues going to pay for peace work. During her visit, Bertha worked with facilitators from the Eastern Congo— Assumani Mikin and Leon Mkangya—to provide training to local community peace workers in Kinshasa. The training was in Alternative to Violence Project (AVP), a set of grassroots community building tools to helps people to find their power for nonviolent action in the face of conflicts.

A further round of training has been done since, so there are now over a dozen skilled AVP facilitators operating in Kinshasa. Support was also renewed for women’s vocational training activities there. Volunteers in Kinshasa continue to work to transform destructive conflicts, and you can find out more about them and Bertha’s visit in recent editions of our newsletter Quaker Concern.

We continued to support conscientious objectors to military service (Jewish Israeli and Druze) and regular meetings of our Israel/Palestine Working Group to offer a place for Quakers to share their concerns and energies toward a just peace. Despite the challenges in this work, it is undoubtedly life-changing for the conscientious objectors themselves.

We assisted the Canadian Peace Initiative in updating their website and in the creation of the animated video The Story of the Rohingya: Imagine Another Way. We continued to provide major support for refugees through Toronto Meeting’s Quaker Committee for Refugees, which offers a whole slew of settlement services free of charge to newcomers to Toronto, and also visits and provides advice and support to refugees in detention.

We conducted research and  developed educational resources and public statements on: synthetic biology; Bill C-47 and regulation of Canada’s arms trade; the need for a National Day of Action on Hate and Intolerance; the possible deportation to torture of Mohamed Harkat; accusations of antisemitism against human rights activists; international day of peace; an independent inquiry into the extradition of Hassan Diab; honesty in labeling of settlement products; and condemning violence against protesters in Gaza.

The main goal of CFSC’s criminal justice work is to eliminate the punitive mindset that pervades society and justice systems by transforming harmful approaches to ones that are healing.

A significant portion of our work on criminal justice was related to the issue of children of incarcerated parents. We published research on how judges sentence parents and how this affects children, and hosted the first ever national dialogue on this issue in Canada with national organizations, academics, social workers, lawyers, representatives of the Office of the Correctional Investigator, the Saskatchewan Office of the Child Advocate, Toronto Children’s Aid, and Indigenous organizations. The dialogue and report on the meeting was funded with support from Public Safety Canada. We were delighted when CBC’s The Sunday Edition interviewed Verena Tan, our criminal justice program coordinator, about the research.

Out of the dialogue, one participant along with CFSC has taken the lead in forming a new Canadian Coalition on Children of Incarcerated Parents and CFSC has committed to organizing these meetings. This also led us to discussions with experts and child welfare about developing training on this issue for their workers. Work on this issue will continue over the coming year.

CFSC committee members and Verena attended several conferences in relation to prison issues and restorative justice, including conferences in Nova Scotia, Saskatoon, and Ottawa. We participated in a Children’s Rights Conference with the aim of contributing to the non-government organizations’ Shadow Report to the UN Review of Canada’s compliance with the Convention on the Rights of the Child, in 2019-2020.

We continued to contribute to policy submissions and consultations on criminal justice issues including mandatory minimum sentences, criminal records, healing lodges, solitary confinement, the Ontario Child Advocate, and homelessness and youth. In this work, we actively engage in partnerships with coalition boards, the National Associations Active in Criminal Justice, the Church Council on Justice and Corrections, and the National Youth Justice Network.

We gave small grants to: a MAP reintegration project, a peer model reintegration group for people released from custody; Communitas for an educational scholarship for a child of an incarcerated person; Concillio Prison Ministry to hold a reintegration learning day; and to Micah Mission to run a fishing trip to support reintegration.

We also facilitated a penal abolition workshop in Winnipeg. We have facilitated a number of these workshops now and review of feedback from participants indicate that they leave with a deeper understanding of penal abolition, i.e. the need to transform Canada’s criminal justice system from one that is based on punishment of the offender to a system that addresses the root causes of crime, demands accountability from the person causing harm, and provides healing for those who’ve been harmed. We are now in the midst of developing a new workshop series on restorative justice skills for Monthly Meetings.

All of these are your efforts to work for justice and peace. Please, donate now. 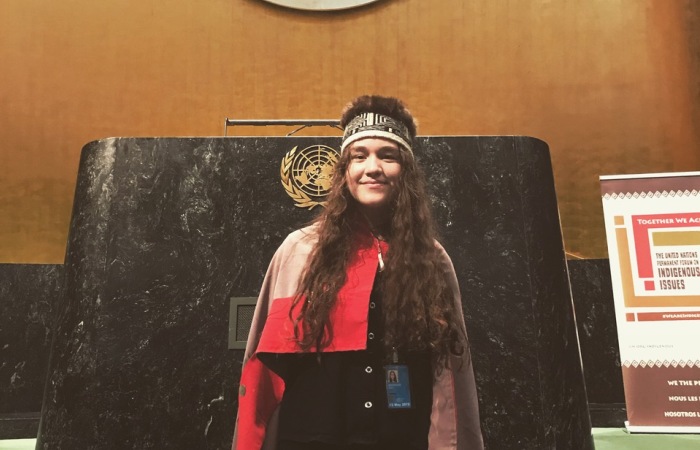 Haana Edenshaw at the UN Permanent Forum on Indigenous Issues 2019

The main goals of CFSC’s Indigenous rights work are the implementation of the UN Declaration on the Rights of Indigenous Peoples and enhanced understanding and engagement in the activities recommended in the report of the Truth and Reconciliation Commission of Canada (TRC).

At the international level, we participated in the launch of the International Year of Indigenous Languages and in the UN Permanent Forum on Indigenous Issues in New York and the UN Expert Mechanism on the Rights of Indigenous Peoples in Geneva.

On the domestic front, we worked closely with the Coalition for the Human Rights of Indigenous Peoples by hosting meetings with government representatives, providing advice on resources, and becoming the webmaster for the Coalition’s website.

We were intensively involved with Bill C-262 and made appearances at the Standing Committee on the Bill. We attended numerous meetings with parliamentarians and senators, the Assembly of First Nations Special Assembly, contributed to joint statements, provided advice, produced resource information, and supported a national Church leaders delegation to the Senate. We attended the UBCIC Chiefs Council in Vancouver and served as an advisor to their Declaration project that is working towards building a legislative framework for the Declaration in British Columbia. A provincial-level conversation there is now beginning to implement the Declaration in provincial law.

Our Indigenous rights staff person, Jennifer Preston, gave presentations and participated in many events at universities, with church bodies, Quaker Meetings, and Indigenous communities across Canada.

We launched the Reconciliation Fund, which will provide grants of up to $1,000 for Indigenous individuals and communities to do projects related to language and culture. We coordinated an annual report of the work that Quakers are doing across Canada in response to the TRC’s Calls to Action. We distributed our guide Truth and Reconciliation: Quakers in Action to help with this work. Participation in this yearly reporting process has increased the involvement of several Quaker Meetings in reconciliation work.

We worked with the University of British Columbia in submitting an application for research funding on implementing the Declaration in Canada and the Global North (New Zealand, Australia, and Scandinavia) and contributed a chapter on Canada to the International Working Group on Indigenous Affairs publication Indigenous World 2018 edition.

We helped Haida youth Haana Edenshaw to attend the UN Permanent Forum on Indigenous Issues in New York for the first time and to connect with many delegates and give an intervention while there. We also produced an educational resource on territorial acknowledgements. 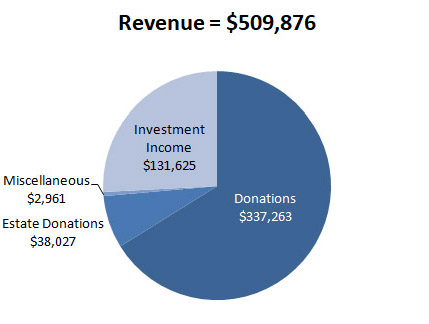 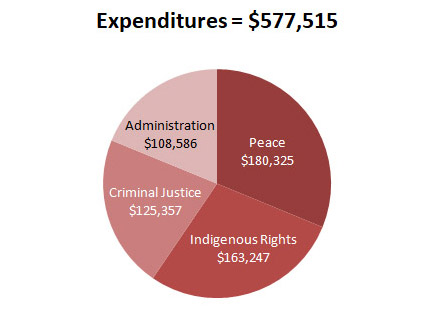 Much of our work is done behind the scenes, providing space and light to important issues in quiet ways, working with partners, fostering dialogue among parties who may not have the chance to talk to each other otherwise. We hope this Annual Accountability Report has given you a simple window into the many accomplishments donors like you have realized in the past year. For more in-depth information on everything discussed above, please visit our website or contact us.

You, as a supporter of Canadian Friends Service Committee, make a difference in people’s lives every single day, even when you don’t know it. Please donate again to continue pushing boundaries for justice and peace.